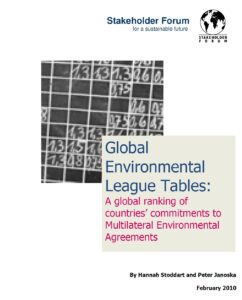 Global Environmental League Tables: A global ranking of countries’ commitments to Multilateral Environmental Agreements – February 2010 (click on the image to download the report)

Stakeholder Forum believes that international environmental law in the form of environmental conventions and treaties offers a critical framework for promoting action on environmental issues at the national level. The proliferation of MEAs over the past three decades also reflects an acknowledgment of the global nature of environmental problems – Greenhouse Gas Emissions from one country stand to have an impact on the rest of the world due to resulting climate change; persistent organic pollutants produced in one country can become widely distributed geographically; impacts on biodiversity can have a significant geographic impact through climate change; global trade in hazardous chemicals without universal legislation can turn some regions into ‘danger zones whilst others are insulated from negative consequences. The development of generic global standards relating to certain aspects of the environment represents a step towards the creation of a ‘level playing field’ where citizens in all countries are protected from the negative impacts of a degraded environment. It also means that standards imposed in one country are not compromised by lower standards in another country that ‘leak’ across borders, either directly through water, land, and air, or indirectly through products.

Compiled and written by Hannah Stoddart and Peter Janoska

The original press release can be downloaded here.