These papers’ themes have been selected to develop a clear perspective on priority areas for The Green Economy, as well as specific theme papers focussing on global inequality, energy, planetary limits, global finance, employment and skills, and natural capital.

PRINCIPLES FOR THE GREEN ECONOMY 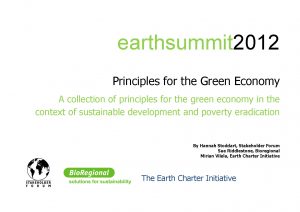 Stakeholder Forum, with Bioregional and the Earth Charter Initiative, has produced a paper that consolidates a range of principles for the green economy, building on existing agreements and also emerging recommendations. The paper hopes to contribute to the emerging debate on defining principles for the green economy to ensure that it serves in the interest of sustainable development.

Paper 1: The Green Economy. Two decades after the Earth Summit in 1992, attempts to govern, sustainably, the global environment and manage the world economy without destabilising crises, are hopelessly disconnected. Since the original Earth Summit conference, we have lived with an economic model based on debt-fuelled overconsumption that co-exists with vast levels of poverty and inequality.

Paper 2: Beyond GDP.  For decades governments have allowed a single indicator, Gross Domestic Product (GDP), to assume dominance as the critical measure of a nation’s progress. It is now widely recognised by politicians and officials across the world that we must move beyond GDP and recognise it for what it is – a measure of economic exchange, which is itself a means to an end; the ‘end’ being the achievement of high well-being for all within environmental limits (‘sustainable well-being’).

Paper 3: Global Inequality.  In Paper 3 we propose a “plenty line” as a counterpart to the poverty line. We present this as a means of focusing public and political attention on the issue of over-consumption. Here we ask, is there a level of income such that people with incomes above this level
have minimally greater well-being than those with incomes at this level?

Paper 4: Living within Limits.  If everyone lived the global middle-class lifestyle of London or Shanghai we would need three planets to support us. And yet, the average citizen of Bangladesh consumes the equivalent of just a third of a planet.

Paper 6: Energy Resources & Services.  Three key issues frame this challenge paper: the deep and persistent poverty that characterises large parts of the developing world, the imperative associated with climate change (both mitigation and adaptation) and, rising and volatile energy prices.

Paper 8: Managing Natural Capital.  The natural world has a lot to teach us. Above all, it teaches us about systems and cycles; that altering one component of a system, however small, can have wider implications within and beyond a given cycle. Human society, the planet, and the economy are all systems and are all bound together in intricate relationships.