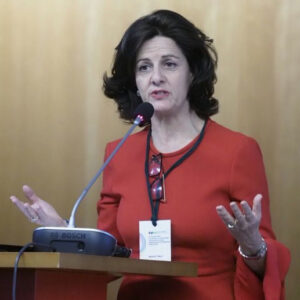 Earlier this week, Professor Daniella Tilbury made headlines in the Catalan media as the news was made public that she was to receive an Honoris Causa from the University of Girona. A Doctor Honoris Causa is the highest academic honour that can be conferred to an individual by a Spanish University.

She is a global authority who has had links with the University of Girona over the last two decades. The University Council wanted to recognise this achievement and thank her for this contribution by conferring the prestigious title of Doctor Honoris Causa. We are excited by this news and look forward to convening a formal and public ceremony at the Rectorate, in her honour on the 16th of September. Academics, experts, and government representatives from across Spain – who have worked with Daniella over the years – have been invited to attend the event. It will be a celebration.”

In response to questions, a University spokesperson added: “Professor Tilbury’s career and contribution are an inspiration to our professors and students as well as the administrative staff who increasingly value the need to take responsibility for shaping a more sustainable future. We have awarded few Honoris Causa and for us, it is important that the honour goes to individuals who have the academic trajectory, international influence but also the ability to continue to help us to move forward.”

Daniella was in Barcelona opening a global university conference when the news broke: “I was truly surprised and very humbled. I am grateful to those who put my name forward for nomination and see value in my work. I view this recognition as an invitation to strengthen ties between with Girona, and Catalunya specifically, but also with the Spanish academic community more widely. My sustainability journey commenced in 1988 and much has changed since then. Now we have a greater sense of urgency and purpose but there is still a great deal to be done.”

Professor Tilbury was recognised by the University of Cambridge, St Catharine’s College in 2018 as an Honorary Don and holds fellowships from other international academic organisations. She was the inaugural Vice-Chancellor and CEO of the University of Gibraltar. Doctor Honoris Causas have been conferred by Spanish Universities since 1920 but few Women have received this honor.

Further information can be found on the Universitat de Girona website.