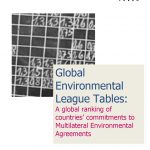 In 2010, Stakeholder Forum produced a series of Global League Tables on countries’ commitments to Multilateral Environmental Agreements (MEAs). That report can be found here.  We are now considering to update it.

Stakeholder Forum has been monitoring the ratification of Multilateral Environmental Agreements (MEAs) regularly for the past eighteen years since the World Summit on Sustainable Development in 2002. The objective of this benchmarking project is a ‘Global League Table’ to highlight and praise progress made by nation-states towards the ratification of MEAs.

SF is now exploring the possibility to update this now 10-year-old report and has begun to identify the resources and funding to do so.  It is also the intention that, once established and ongoing, the new League Tables will encourage further action towards ratification in countries where progress is slow.

Based on the data identified, points were assigned for signing and ratification, and points deducted for non-signing.  If a country ratified the MEA it received 3 points, whereas if it has only signed the convention without ratifying it (i.e. became a party to the convention, but did not ratify it) the country received only 1 point.  If a country has not signed the MEA then one point was deducted from its total; on this basis, a country could score a negative number of points overall if it is a non-signatory to more MEAs than it is a signatory.